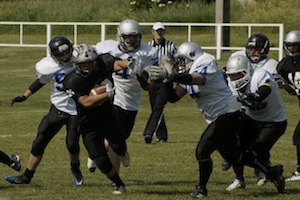 Nothing says "Fall" like the crunch of football pads. As a new school year begins, many Massachusetts children will exchange their flip flops and boogie boards for a pair of cleats and a football helmet. The gridiron - a place where lifelong friendships are formed and glory gained, is also a place where serious football related injuries can occur. Children and parents know and understand this, yet both choose to assume the risk of injury in exchange for the pursuit of excellence on the field, and for this they should be applauded. But what happens when a student-athlete suffers a serious injury on the field? Does he or she have any recourse against the individual(s) that caused the injury?

A student-athlete that is injured by an opposing player may be able to successfully seek damages for injuries caused but only if the opposing player acted with "reckless disregard" for the safety of the injured player. In imposing the standard of reckless conduct versus the lower "negligence" standard, the Massachusetts Supreme Judicial Court opined in the case of Gauvin v. Clark, 404 Mass. 450 (1989) that the "vigorous and active participation in sporting events should not be chilled by the threat of litigation." So what constitutes "reckless disregard" for an opposing player's safety on a football field?

Despite the popularity of football and the prevalence of football related injuries in Massachusetts, the Massachusetts courts have not yet had the opportunity to answer this question. In Gauvin v. Clark, the plaintiff suffered a ruptured spleen, which was surgically removed, missed seven weeks of school and suffered bladder and abdominal pain nine years after he was struck in the abdomen by the butt-end of the defendant's hockey stick during a face-off. In Gauvin, the jury found that the defendant, Clark, "butt-ended" Gauvin in the abdomen and that this action violated a specific safety rule. However, the Jury did not find that Clark acted recklessly. Even the Judge in this case was unable to conclude that the facts supported a finding of recklessness. In light of the Gauvin case, it is safe to assess that in order to be liable for injuring an opponent during a football game, the reckless conduct must be so blatant and obvious as to leave no doubt in any spectator's mind that the act did not occur within the normal course of play. Possible examples of reckless conduct giving rise to liability are: violently tackling/blocking an opponent well after the whistle has blown and play has stopped, tackling/blocking an opponent that is noticeably out of bounds, and tackling/blocking an opponent that is so far from the ball during a play as to be in no position to impact the play itself.

Due to the well-publicized plight of former NFL players suffering from physical and emotional trauma brought on by years of violent collisions, the sport of football and the safety and conduct of its participants will be under a microscope. While football injuries are unavoidable, so long as student-athletes play hard, with mutual respect for one's opponents and the rules, they will be immune from liability. With that said, if your child suffers injuries on the football field and the resulting medical bills create a financial burden that your family is unable to bear, a personal injury attorney may be able to help you recover damages from the responsible party.